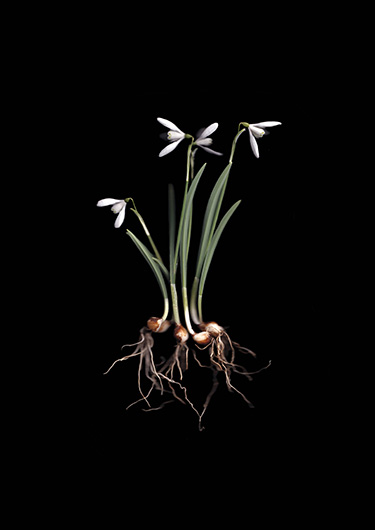 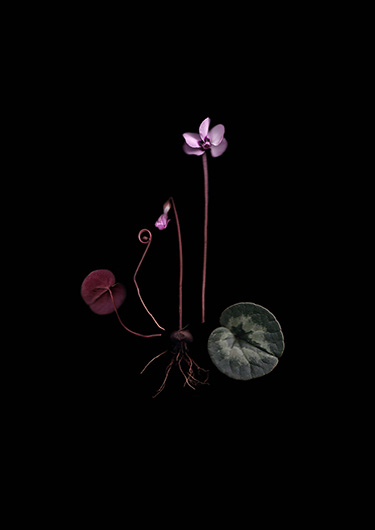 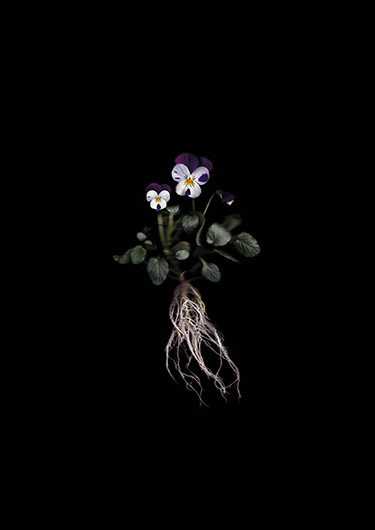 Mary Delany (1700 – 1788) was an English artist famous for her “paper mosaicks” which she began creating in her widowhood at the age of 71. She made almost a thousand of these detailed and botanically accurate depictions of plants, for which she became famous in her time, partly due to the support of King George III and Queen Charlotte for her work. In this particular series I wanted to depict the sorts of plants that might grow in the winter garden of an English lady such as Mary Delany.

To create these photographs I have used a camera-less technique that I have developed using the scanner attached to my computer. The way the scanner lights the objects placed on it creating a luminous effect, combined with the black backdrop, reminds me of Mary Delany’s paper collages. Using a camera-less technique also echoes the methods used for the very first botanical photographs that were taken in the early 19th century, such as the cyanotype photogram.

The lighting effect of the scanner means that very little light enhancement post-production is required in my photographs. I have some control over their composition; which I employ in the way I place the plants on the scanner bed, and by digitally cutting and re-placing certain elements of the plant post-production – such as the petal falling in the photograph of the Crocus for example. This way, I am able to create a botanically accurate, yet stylised final image of the plant.

This series received a silver-gilt medal at RHS Art and Photography Awards, 2019

+ To see prices and purchase, head to ‘Shop’ in the menu bar.